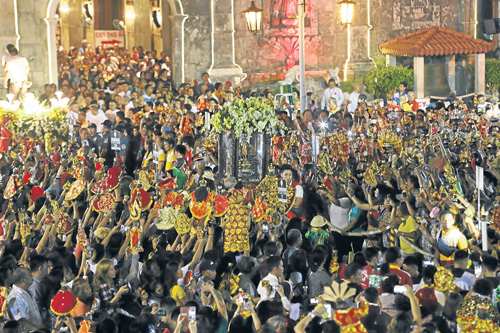 CEBU CITY—Urvic Inso had been away from Cebu City for three years. He missed his family, but he was also longing to experience a hometown event which, for him, was equally important.

“The Sinulog, the Sto. Niño—these are as important as life,” he said.

Inso, a machine operator in New Zealand since 2014, has four children—the eldest at 11 years old and the youngest, 2.

He made sure of his return home on Jan. 14 so he and his family could attend the Sinulog Festival and pay homage to the Child Jesus at the Basilica Minore del Sto. Niño.

Inso was among the “balikbayan” who made the trip back home, especially for the Sto. Niño feast.

Carlo Suarez, president of the Hotels Resort and Restaurant Association of Cebu, said tourist arrivals in Cebu, however, slightly decreased after the city government banned street parties and drinking of alcoholic beverages near the procession and grand parade routes.

The measure was first implemented in 2018 following rowdy street parties after the Sinulog.

“I have to be honest. We’re quite affected because the Sinulog now is no longer as festive as in previous years. It’s no longer that wild, and we know that tourists come here to enjoy and to party,” Suarez said.

He, however, believed that the city government made the right decision to put everything in order during the festival.

“It’s the right thing because Sinulog is really all about the Sto. Niño,” he said.

Mayor Tomas Osmeña reimplemented the liquor and party ban along the Sinulog routes through Executive Order No. 44 (An order regulating business establishments and vendors during Sinulog Festival 2019).

The EO banned concerts, shows, performances, gigs, events, street parties, activities which entail or require putting up or using loudspeakers and other sound devices, and similar activities along the parade and procession routes.

These events are also prohibited on Escario Street, from the provincial capitol building up to Gorordo Avenue.

“Business establishments along the Sinulog parade and procession routes are not allowed to set up tables and chairs outside their respective premises, including parking spaces, in order to accommodate more customers,” the EO states.

The EO also bans the distribution, selling and consumption of alcoholic beverages within a 300-meter radius along the parade route and on Escario Street.

Osmeña said anyone caught violating the directive would be detained in cells that the police would set up along the 6-kilometer route. Establishments violating the EO would be closed.

Four days before the Sinulog Grand Parade, 90 percent of big hotel rooms were booked while 70 percent of midsize hotels and pension houses had been reserved by guests.

Tourists usually visit Cebu in December to celebrate Christmas and New Year then stay on for the Sinulog in January to end their holiday.

Celebrate the Year of the Ox at Diamond Hotel Philippines

Family vacations primary reason to travel for majority of Filipinos this...

New parks to enjoy in the city

Dine-in at restaurants to be allowed but under strict health and...

Any cookies that may not be particularly necessary for the website to function and is used specifically to collect user personal data via analytics, ads, other embedded contents are termed as non-necessary cookies. It is mandatory to procure user consent prior to running these cookies on your website.